After leaving the homeland, hubby and I find ourselves another job this time we find ourselves in Surry, again living in.
The accommodation was a bungalow that we shared with another person, we start work and to start with, all is good but the owners expected their value for money, that was a shock to my system after working very hard in the restaurant which was very busy I was expected to do washing up as well, and imagine my face when the next morning she told me to go to their living quarters and clean their bathroom and do the ironing, least to say I was not a happy bunny.

So we decide to turn our life around and start looking for a house of our own, we thought Essex was a beautiful county and we were very happy there, so on our day off we go looking and found and bought our first home in Essex, where we had our first job as husband and wife working in the Blue
Boar hotel, it was there that we met and stayed friends with My first daughter's Godparents.

Anyway we had been married for four years and I was getting broody, but Hubby being sensible say's that we should wait and work a little longer so that we could earn enough to buy furniture...
We carry on working in this not so good job.

But one morning when I get up I felt quite ill, and after all this sickness I decide to go see the quack, so he says that I could be pregnant...... Tests are done..... (((He was a lovely Doctor))) and it was confirmed yes I was pregnant.... Least to say the decision to work a little longer wasn't going to happen, as soon the bosses found out that I was five months pregnant they told us that we were no longer needed.

And that's how our adventure started in our new house in Essex, with no job and not enough money to buy furniture, we had just enough money to buy a bed, linen, second hand fridge, rented television so for the next few months until hubby was able to find  work we sat on the floor, not easy when you are six months pregnant luckily we bought the house with carpets....

So Hubby still trying to find work and he wants to change jobs keep out of catering.
So he decides to ask at this factory for work, but gets told no because he did not have experience in welding so he comes home upset....Then he decides that his going to work mini cabbing in London, he does that for a while he was working all night and sometimes instead of coming home he stayed at my sisters for a few hours sleep..... One day after working all night for a couple of nights his driving home and he wakes up in a middle of a field, lucky for him it was not a bridge or a roundabout, least to say that was a wake up call....

So he finds a job working in a restaurant in Halstead. Lovely people they took us to their hearts am glad to say we are very good friends still.... But he needed a full time job, so he hears that the  factory that he had previously asked for work were employing again so he tries his luck and he had the same answer no experience, so he says I am not stupid I can learn, and learn he did, they did give him the job so now my Hubby is a welder.... As the wages started coming in we were able to buy the furniture... the first money earned we bought the sofas ah! to be able to seat in comfort bliss, one day we went to visit our Portuguese friends in Wanstead  they had a café and next door there was a charity shop, They had a drop-leaf table and a side board also a little corner unit, all we needed was the chairs, another time we were walking in London Portobello Road  and saw this four Edwardian chairs so we bought them and that's how we furnished our dining room. 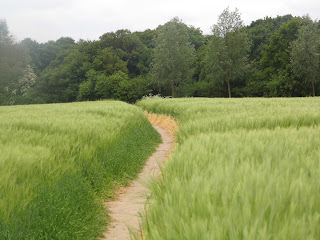 Hi Ana - hard work and perseverance paid off. Interesting to read how you both coped ... congratulations - cheers Hilary

Thank you Hilary it was though times but we came through.... am glad to say.....