Giulioantonio I Grand Captain serving King Ferrante of naples, strove against the Turks and gained for the family the diploma relating them to the King of Aragon, besides the right to receive the same honours and the permission to include the Royal Bearing into the Acquaviva's escutcheon. His death on the battle field for defending the Christian Faith persuaded the king to make significant concessions, intended as reparations, and to strengthen the Acquaviva family. The first-borne Andrea Mateo obtained all his father's military prerogatives and the permanent conveyance of a vast territory located between Martina Franca and Noci, where the Selva and Alberobello (founded later) can be visited 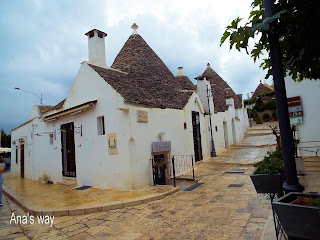 Hi Ana - the history of Italy is really convoluted ... I keep finding out more ... it is a melting pot of cultures. Love the look of the little street - cheers Hilary

Hi Hilary so pleased that you like it... I find it so interesting.. Thank you..