History of the Quinta part 3

This was a happy stay that, months of liveliness and luxurious life to Quinta das Angustias-the retinue of the Duke of Leuchtenberg consisted of a prince, a Count, a captain, a secretary and fifteen servants. In love with the beauties of the island, the Duke visited most of it, and he even went to Porto Santo.

As he himself confessed with emotion as he embarked aboard the frigate Palas, when he returned to Russia, he left the island with a certain nostalgia. Some twenty years later, one of his sons , Prince Nicholas Maxmillian also stayed in Madeira for some time.

In August 1852, Dowager Emperess of Brasil, widow of Pedro IV and his daughter the princess Maria Amelia disembarked in Funchal. They arrived from Lisbon, aboard the frigate King Fernando,escorted by corvette King Joao I and by warship King Luis. Their arrival was a memorable event: the pontinha was crowded with people from all walks of life curious to see the visitors , whom they accompanied in a pompous procession to tht Quinta das Angustias, where they stayed.

Both mother and daughter were impressed with such a warm and enthusiastic reception. Maria Ameliasmiled..... A gentle smile that captivated the crowd. The young Princess was so beautiful and simple...But behind the calm and pleased expression of the Dowager Emperess lay a vage sadness . Everybody understood it, and still more warmly they received both visitors with respect and sympathy. It was known that the Princess was seriously ill. Who  would question the apprehensions of her mother? Yet there was an atmosphere of hope.

But it was all in vain!Not even the benignity of the climate, nor the cares that surrounded her, prevented the ruthless course of her illness: pulmonary tuberculosis. Five months of agony for both mother and daughter, in the placidity of a quinta full of flowers, having before them the immense sea the Princess loved so much. The young lady aged twenty two, had always been very weak, but for all that, she showed great interest in her studies and in art, as well as in life, the life that was runing  away from her every minute. A the worst finnaly happened. The Dowager Emperess returned to Lisbon aboard the very ship that carried her daughter's body. An even bigger crowd than the one who was presentat the moment of their arrival assisted to the embarkment, in a moving and absolutely spontaneous show of grief and respect. No one was ashamed of crying. 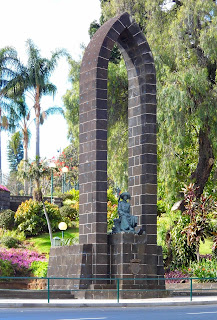 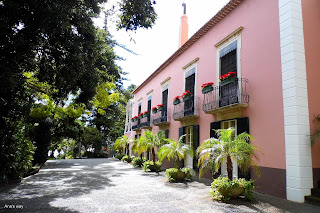 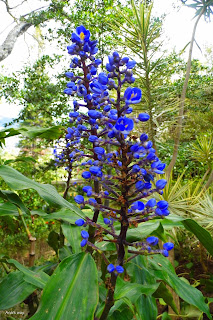 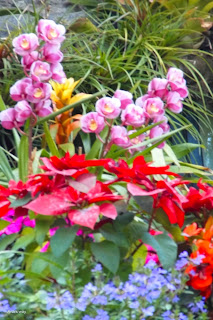 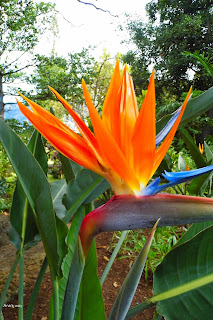 Among the visitors one could find kings and the aristocracy; scholars and artists, writers and poets; millionaires and famous adventures . They brought with them the outside World- languages never heard before, unknown traditions and attitudes.

And along came the dreams, and the hopes and the despairs that each one brought within himself, Rich people, brought to the island an unusual liveliness opening new perspectives of development. Hotels were promptly  built to English initiative .But there were always people who loved the quintas and they decided to settle in one of them, so that they could stay for a longer period.

To the unmistakable panorama atmosphere  men had imparted to them, taking advantage of the exceptional conditions of nature, the quintas added the atmosphere that little by little human life created for them. This is Quinta das Angustias - perhaps the only one in Madeira that keeps intact the enchantment of a magnificent and painful past, with unpredicted  mutations and a variety of faces- people coming and going-in a restlessness, longing for rest happiness and comfort.

Originally it was called Quinta das Angustias because the chapel is dedicated to our lady of sorrow.
it is believed it was part of a dynasty dating from the seventeenth century. It had successive owners among which Nicolau H. de la Tueliere, who was responsable for important restoration works. At the time, the famous Mirante de D, Guiomar already existed in the estate.

There is nothing extraordinary about it....is its location at the top of the cliff that made it known as a reference point on how to anchor in Funchal Harbour.
It was named after D, Guiomar the lady who lived in the quinta at the time...Also

The Duke of Leuchtenberg, son of Prince Eugene Napoleon and son-in-law of Czar Nicholas I. he came to Madeira wile ill in the hope of rest and rehabilitation- thus bieng the reason for his trip in search of relief in this privileged climate. Tis happened in 1849. One year later he left the island rejuvenated, blessing the moment he headed for Madeira....More to follow. 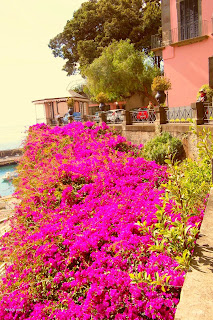 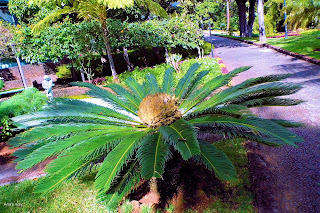 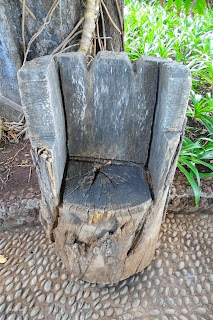 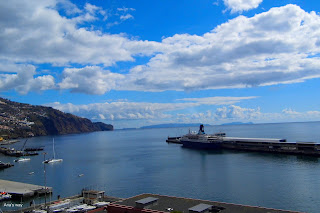 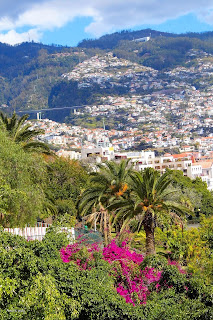 You might think it strange that at the ripe old age of 65 I am finding things about my Island that I really should've known, you see, I left my Madeira at the age of eighteen years of age and then at that age I really was not thinking about history and so fourth.

So now I am trying to find as much as I can I feel greedy for knowledge, so here it goes I'll try and write something about my beautiful Island although writer I am not.

The other day while walking with friends Collette and Sue in the gardens of the Official Residence of the governor of Madeira which is open to the public, I noticed that the little chapel had its doors open I had been there many times and the doors weren't open or at least I never noticed really lovely inside as we came out saw this man at the entrance of the building, asked him about the church and building when it was built and so on but he was not to sure so I asked about getting a book about the history of the quinta and he told me that I probably get one in town.

A little while later he calls me and hands me a book and say's that I might be able to find what I am looking for in it, so pleased what a lovely gesture.

The Quinta stands by the sea on the cliff facing the port. A grand and luxurious house- the perfect nineteenth century scenery with beautiful tiles on the varanda, which opens wide: a lovely chapel- probably the most important of all the chapels of the madeiran quintas; flowers in profusion, especially camellias and azaleas in a wonderful garden where trees exhibit a beauty which is uncommon even on this island of ancient and rare gigantic plants. To walk on this dark shiny cobble stone pavement which stretches out like waves due to the forever extending roots; to feel the sweetness of the light filtered through the foliage, green and compact throughout the four seasons; to stroll around the mossy paths amongst the flower beds of this sleepy garden.....

How many parties - and tragedies as well- has this country house, so full of romanticism witnessed! If one place is able to concentrat all the ingredients of a small world apart from ordinary life, the Quinta das Angustias is, in Madeira that place- and a sort of sentimental cosmopolitan, which then appeared on the island.

During the eighteenth and nineteenth centuries, Madeira was known as ((Land of Hope)) For certain people suffering from either physical or spiritual illnesses. The loversof new horisons found the island so beautiful and different from all the other islands that they always returned, and some even stayed here for good.... I will  be writing a little more another time.... 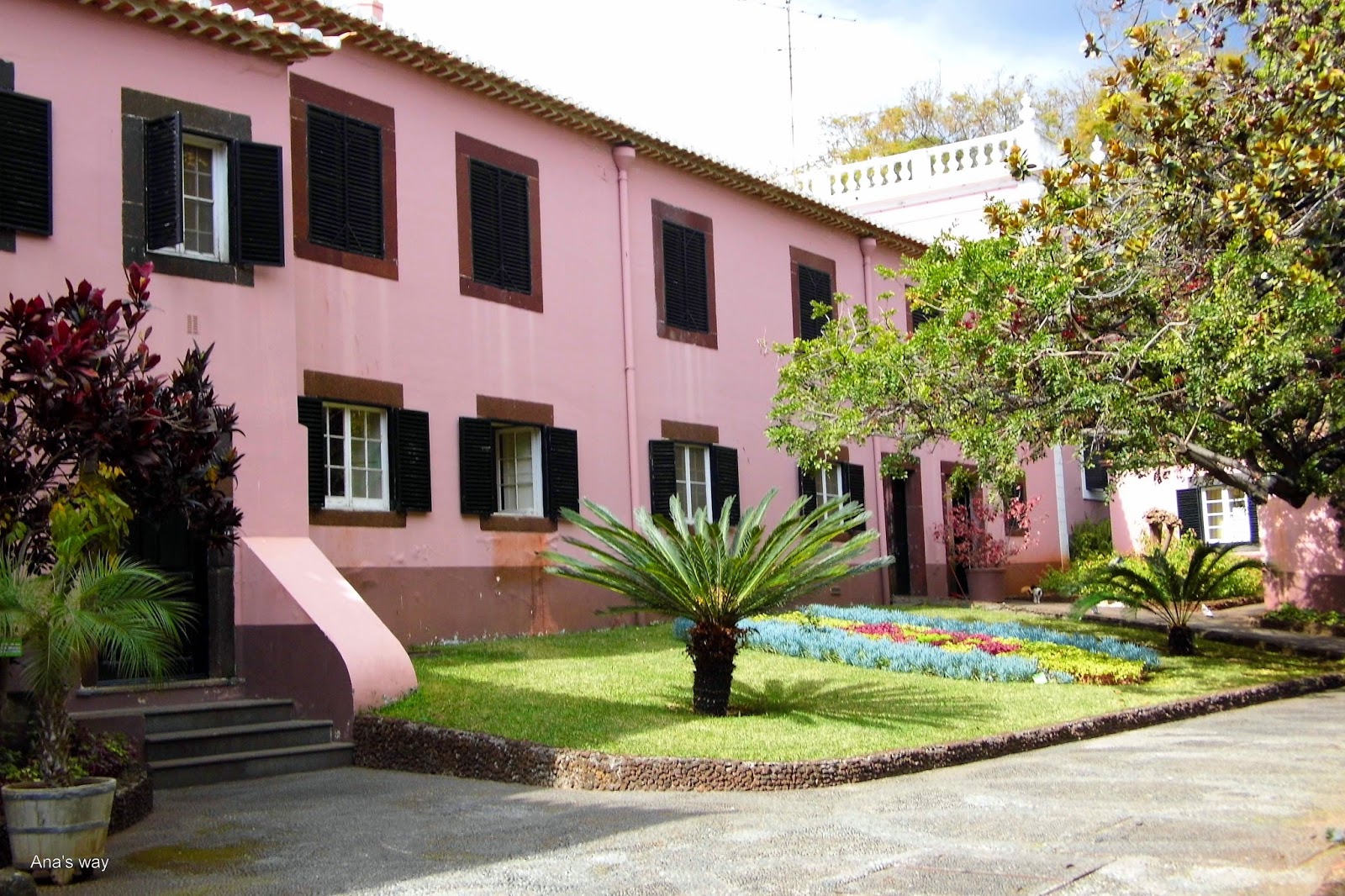 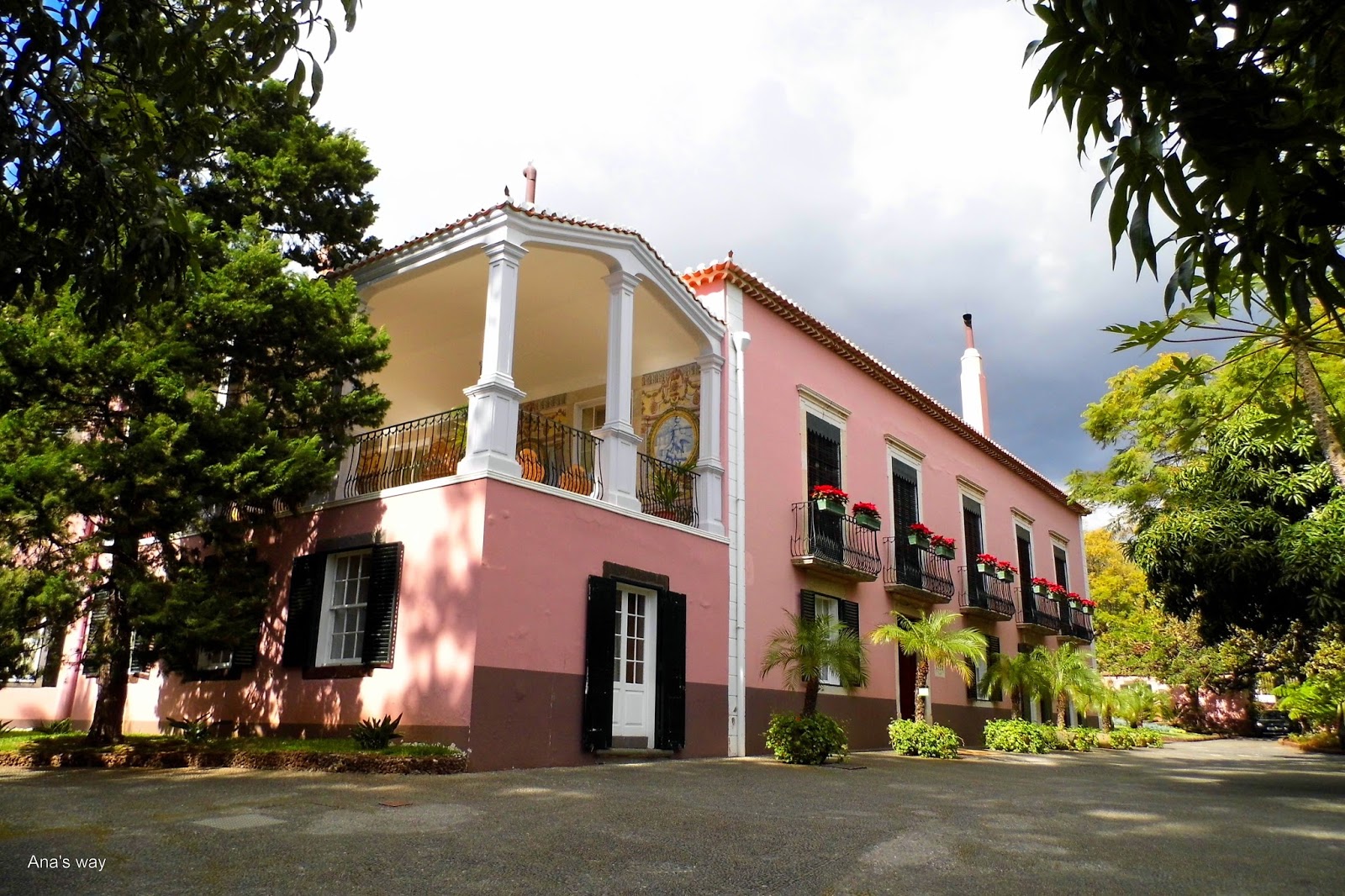 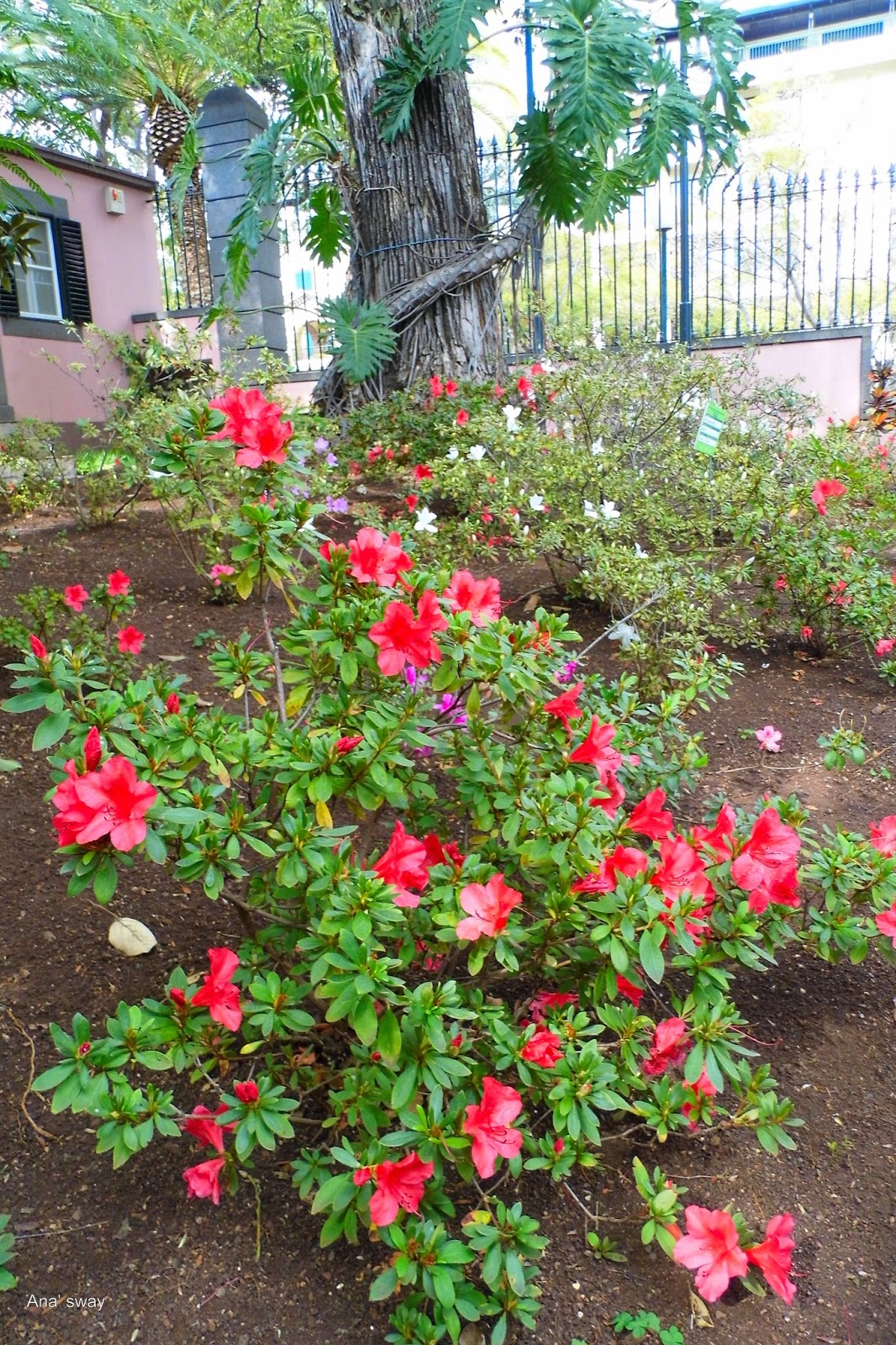 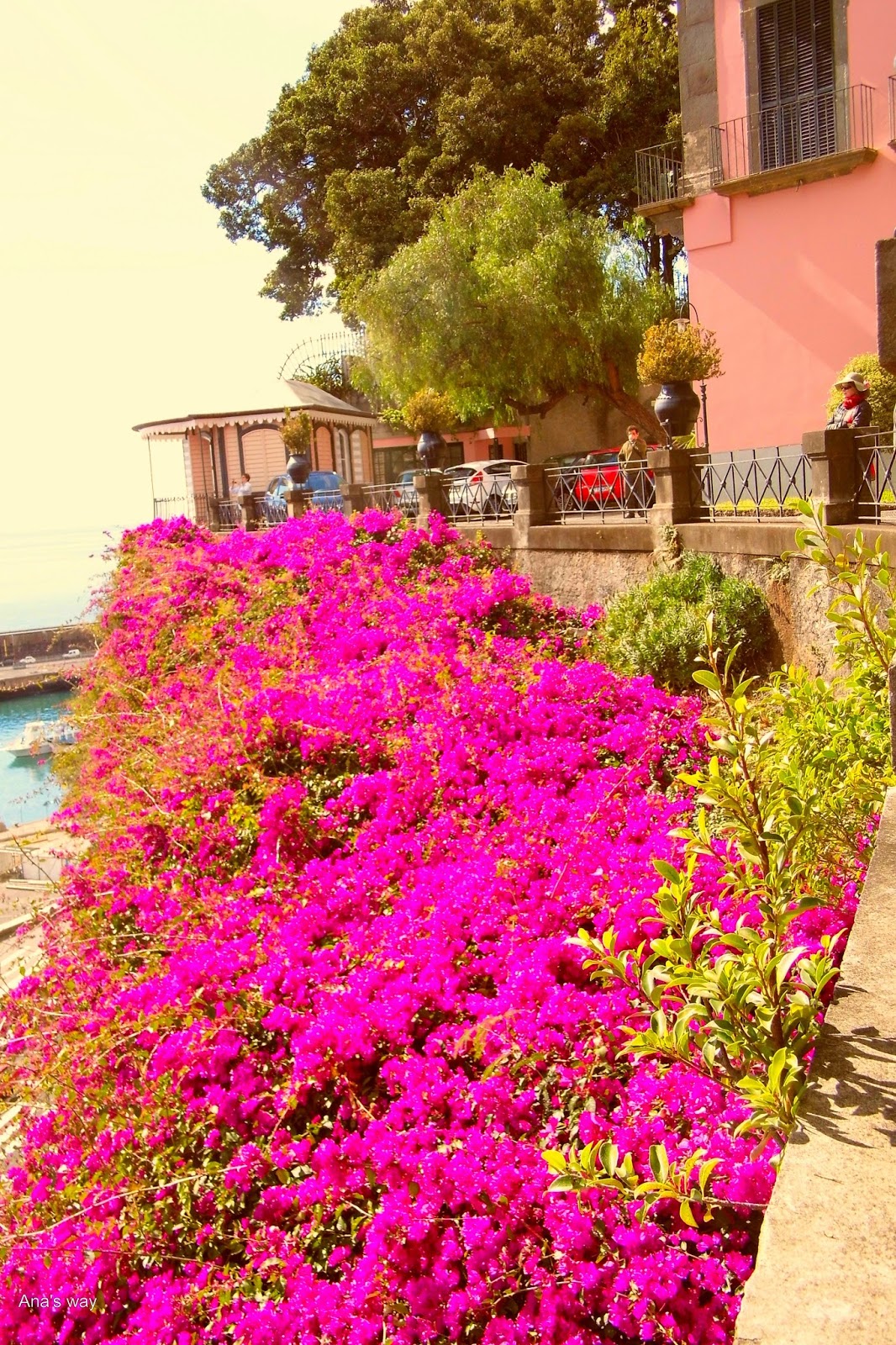 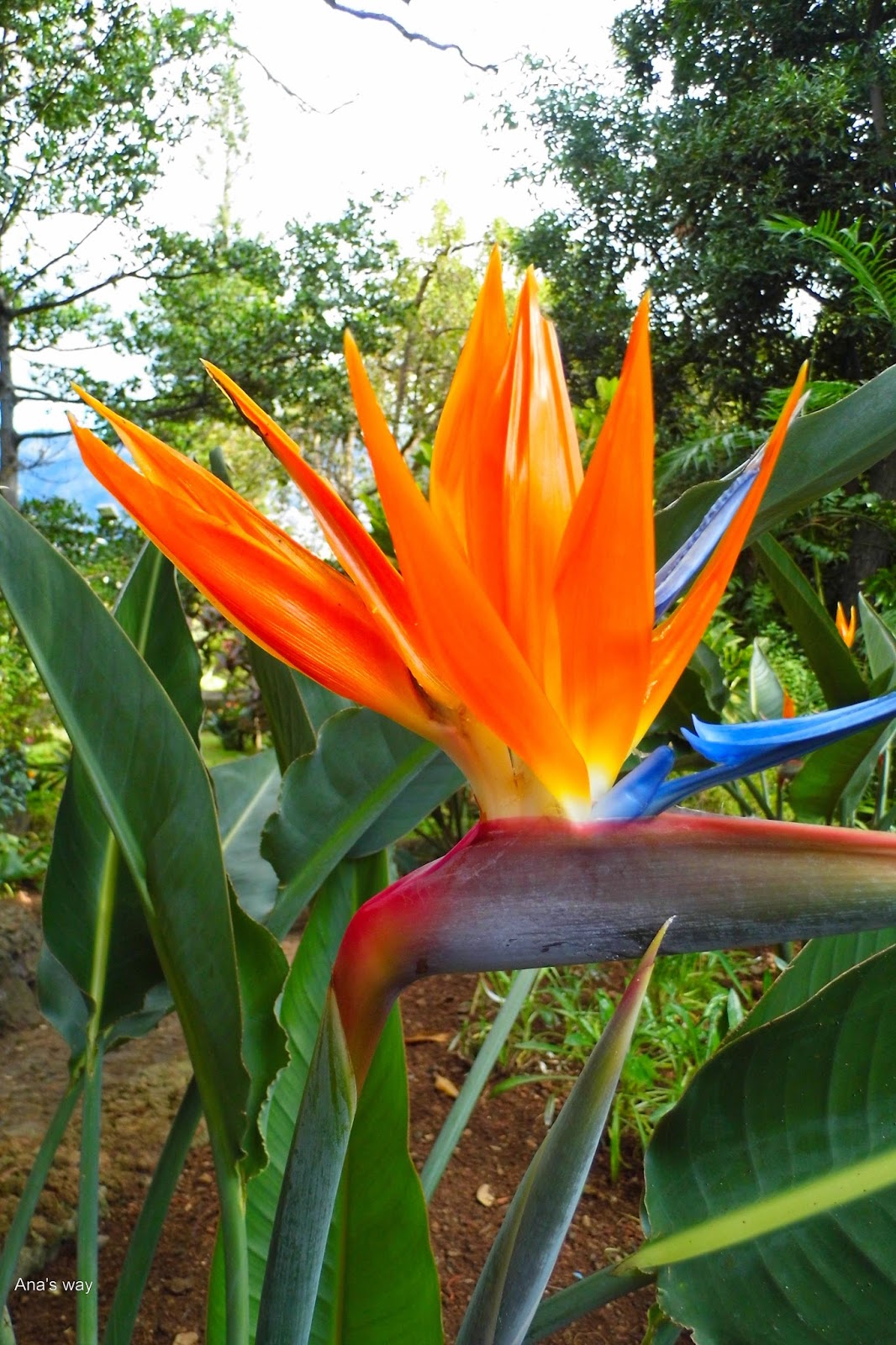 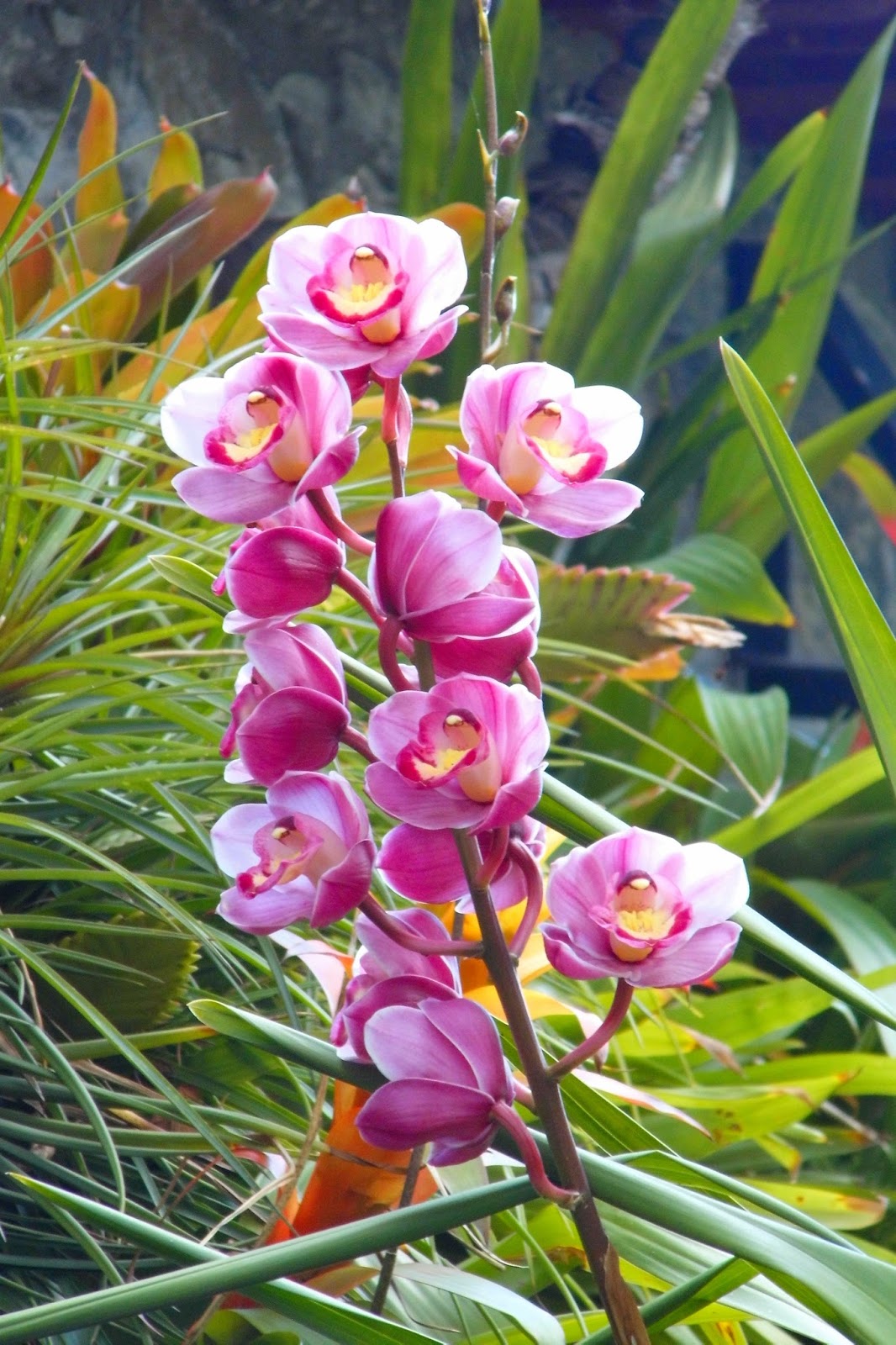 Had a few day's of pure joy, friends came to visit so we did a lot of sightseeing its always a pleasure, Sue and Collette had been to Madeira before but had not seen the interior of the Island and being winter its always pot luck with the weather, but this year it has been amazing with lovely sunny warm hot day's.

First day was spent in Funchal where we walked to Park Santa Catarina the girls loved it with all the flowers and the tropical trees, then we came out and a few feet up the road I took them to Quinta Vigia that's the governor of Madeira official residence again loads of interesting trees and all sort of tropical plants.

Quinta Vigia and Park Santa Catarina in the old day's used to be a Cemetery.
Funny thing was I have been a few times there and have taken a few of my friends to show them the beautiful gardens and flora, but had never noticed the little church, as we were walking along I noticed that the door's were open and so we walk in and was so surprised to see this lovely little church ,lol sometimes one walks around in a daze and don't see whats round you.

So I wanted to know how long it had been there and how old the Quinta was,
As we were walking along saw two men talking by one of the entrances of the quinta so I ask him how old the place was and his not really to sure so I ask him where I can get a book of the history of Madeira and of this quinta which once had been a cemetery so he tells me and of I go, a little wile later he comes towards me with this official book about the property which he gives to me and says that I might find some information there. It was such a lovely gesture.

I'll be writing about it another time but for now here are some of the photos that I have been taking this past few day's. 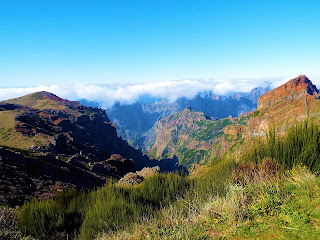 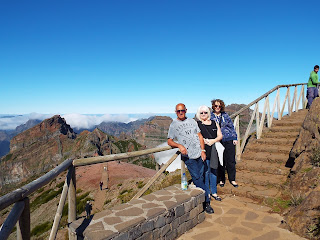 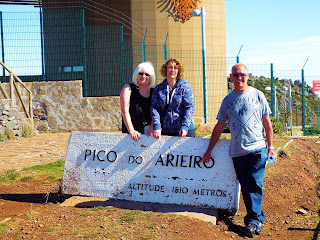 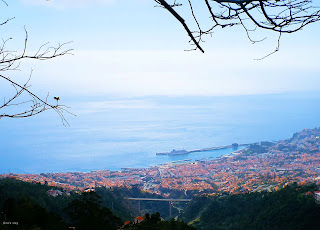 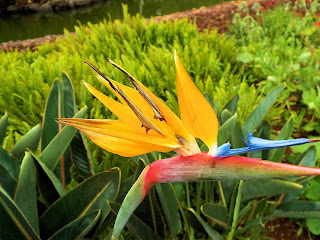 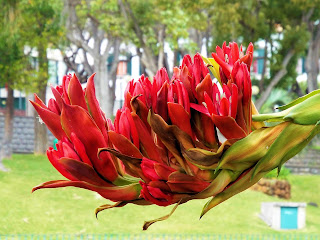 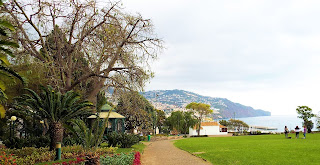