Here we are settled in Heywood Way in a house of our own, and a baby on its way so Hubby starts working at the factory as a trainee welder of course he was on a low wage to start with, so to make ends meet he still went to Halstead to work at his evening job.

Bless him he really  did work hard to pay the mortgage and everything else since I was not working, he started work on his day job at seven in the morning he cycled home for lunch, since he only worked down the road, finished at five if there was overtime he finished at six.

Then it was a marathon to get home change and go to his evening job, one day I was in the kitchen when I see this bike flying by my window (((lol))) hubby was rushing home to get to his other job and his bike had a puncture for the second time that day, when he came home at lunchtime he had to repair the tire and when it happened again he lost his head, it was really funny and for years after that I have told that story with great merriment... It always makes me smile hubby wasn't a very patient man.

So the day arrives for baby to make its appearance, of course Hubby was in Halstead at his evening job, I phone up and tell him in tears to come home that I thought the baby was coming, I was so nervous that I kept being sick, he arrives home at eleven or soon after and he tries to get me in the car but needed to be sick again so he was getting quite stressed on the way to the Hospital he had to stop a few times at last we arrive, and of I go to be checked in at the maternity ward, I was left on this side room with hubby by my side we had been told that it would be a while yet....

Hubby went out for something to eat and all hell broke loose at least that's how I thought of it.... the pains started coming and he wasn't there I was really scared so that's how I become a Mum at the age of twenty five, Mum to a beautiful little girl weighing 7pounds and 5onces. Then o (((fadista))) Hubby  turns up when all is over. 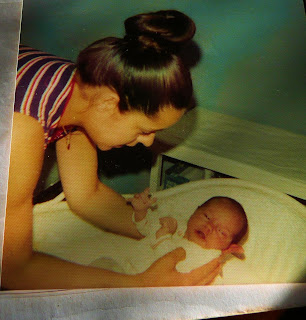 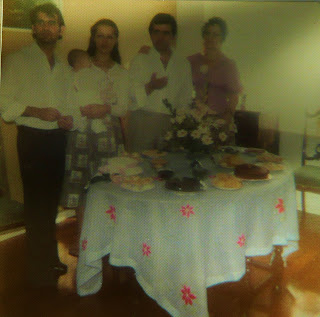 Hi Ana .. what a lovely supportive husband he is ... and yes, I'm sure many babies arrive once the husband is out and gone for a while! Anyway - she looks great for the Christening ... lovely photos .... and many years later - cheers! Hilary