Once again I find myself awake far to early, and the memories start kicking around in my head, like the time when hubby comes home from work and tells me that the factory is going to close down, and he starts talking about moving back to the old homeland, but I am not keen on the idea so for day's if not weeks, that's all he talks about and we argue non stop until one day tired of all the arguing I give  in, I don't really want to go back but to stop the arguments I agree although against my will to sell up and move.

Once hubby gets an idea its very hard to persuade him otherwise, it all come about the year before when our friends  moved back to Madeira and now that he was going to loose his job he thought it was the better option, so we sell up and the day arrives to emigrate but this time its to the homeland, because that's how it felt as if I was emigrating.

Of course hubby did not come we us he was suppose to follow at a later  date so we arrive in Madeira and move in with Mum until we move into our own home. Never forgot the girls faces when we went to see our home to be, the house had been closed for quite some time, and when we walked in there was cockroaches inside, the girls look at me and say we don't want to live here, but we had no choice and live there we did.

For the next few day's I cleaned scrubbed and disinfected every single corner of that house so by the time we moved in there was no cockroaches insight or so I thought, until one day after we had moved in we were in the lounge when I looked up and saw a roach on the ceiling so I grab the spray and give it a good spray 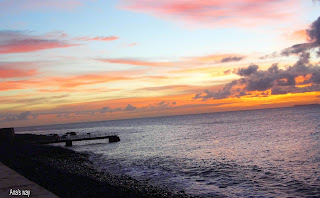 not knowing that it was going to fly so I scream and run for the front door with the girls screaming behind me.

After that I had to learn not to make a fuss otherwise the girls would not settle, the thing about cockroaches is they like the heat, so there was nothing for it we had to share lol....
So sprays were bought and before going to bed I used to spray outside around the doors and that kept them out thank goodness......
Posted by ana at 21:48